Was it Steve Jobs who first made us aware that we were living inside of boxes? I’m not sure. But it’s so hard to be sure of anything in this changing world, isn’t it? I guess none of us likes being defined by the boxes to which life consigns us. But hey, that’s life.

Two of the boxes that most define me nowadays are Artist & Senior.

I chose neither of these. The first box is one I was born into and shaped to fit because of the family and society that raised me. The second is the box everyone of us is forced into should they live long enough.

I was advised long ago to shed that artist box and get a real job. I really tried but over and over potential employers discovered that I was only pretending not to be an artist. As I grew older and society began to measure me for my senior box things began to get really uncomfortable.

Being an artist had been difficult enough but until I became a senior I had no idea how it felt to be a true outcast. But I’ve been a lone survivor for a very long time.

Over the past few weeks I’ve made an attempt to contact other survivors like myself, those floating about in their own boxes, trying to find a friendly shore on which to land and build something suitable and worthwhile.

I thought there was a solid shore but I guess that was merely an illusion. So these days I just float, imagining that somewhere out there are other artists, some like myself who have at most 20 or 30 more years of life, perhaps 10 more years of making art. I’m trying not to be sad over this failure. At least I tried.

My name is Maggie and I am a Canadian artist.

Until it gets so cold that I can no longer work in my Bathurst studio I hope to be there Tuesday, Friday and Saturday. Visitors are always welcome. 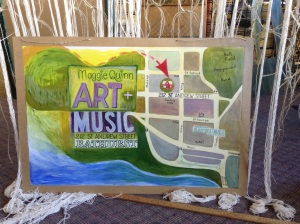 Visitors welcome to drop by for a chat on most Tuesday’s, Fridays and Saturdays 10-3pm

It is Friday October 16. I was in my studio today and here is what my chorus line looks like so far 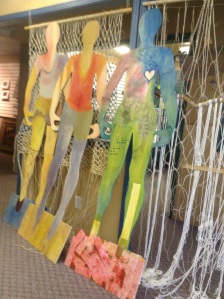 How to build an institute of world artists? Every great artist institute has to start somewhere. Maybe I would start by looking at what it is that most of us individual artists have in common. I think the word here might be persecution. If we have not shown ourselves willing to join the side of money and power, we will struggle throughout our lives against a huge wall designed to keep us out. In order to keep fast to our right to express our truth and our art, we face persecution from all sides. We will be persecuted by government and educational and corporate elite and will receive no share of the funding given to compliant art societies who are able to keep their members under control.

Then I think of another group of people who have faced tremendous persecution in this world. Who have been more persecuted in our world than Roma? Just imagine being an artist and Romanian too, I thought to myself. Since I would gladly trade my art for bottles of Romanian wine, why not go to the land of that wine and see what is happening with Romanian artists. I found ERI.
https://www.opensocietyfoundations.org/sites/default/files/european-roma-institute-concept-paper-20150515.pdf

This sounds good, but what about individual artists? Are they able to make a living? Do they work for bottles of wine?

Maybe my use of the word Roma should be Romanian or Romani. Maybe the word Sinti also needs a place. I admit that I am no expert on Romani, Roma, Sinti or the art made to tell us about them. At least one such art-piece exists in Germany

Another term is Gypsy.

I do realize that Gypsy is considered a much frowned upon term these days, Romany or Traveller being more acceptable, but what if Gypsy is the word you grew up with? What if your granny had told you that Gypsies were honourable, hard-working people who cared deeply for their children? Does that make a difference? If persecution in some places offers people no way of feeding their children, does name-cleansing really help them?

And not everyone shuns the word Gypsy, even today. I don’t know whether she was an artist but I found a story about a Queen of the Gypsies in Miridian, Mississippi

Get together with artists?

Fade into the background?

Where is my pride … Is that the question?

Fade out like a dignified senior is expected to do?

Not on your life, O Canada.

O Canada, you gave me this bed upon which I am expected to retire.

So O Canada you think artists are worth nothing?

So … To all those good capitalists who have been living off of the creativity of artists for my lifetime … What can I say?

I remember one woman, years ago in Bathurst … Some say she sailed away on a love boat … I have no idea. What I do know is that she stole my work. Yes I know those are harsh words but it is the truth. She stole my design which was a drawing of a cornucopia which was to have been used on a menu. I was paid only for the menu design. What she did was to take my drawing and build her whole marketing campaign around it. She even had the drawing copied onto a large sign made to hang outside her very successful high end gourmet dining room. I was never paid for this extended use of my drawing.

What can I say about the young man who was starting up a consulting business in Bathurst back in the 1970s.  He asked me to design a brochure. I worked many long hours and presented him with a professional camera-ready copy.  He disappeared and I was never paid.  Commercial art, some say is a cut-throat business.  I agree and I guess that is why I closed down my small business shortly thereafter.

Then there was the good Christian woman whose Bible I repaired. She too disappeared and I was never paid. And there were all those other fine folks who complained that I asked more than five or ten dollars to repair a book that might take hours of work. There was also the hand-tooled leather guitar strap that  was  never paid for.

Then there was the super smooth talking Bathurst salesman who had this brilliant idea for something or other involving a picture of a baby which he asked me to do. Well, yes I did it,  gave it to him … OK … One more mistake.  I never saw my drawing again. Need I say that I never saw a cent of money.

I suppose all this might be discounted by saying that I am not a competent business person.  I don’t pretend to be. I am an artist.

So why did I not get out and get a “Real Job” all those years ago?  I tried … For years and years.  My government was no help there either.

You did what O Canada?

You supported your Artists?  That would be an outrageous lie.

Recommendation Concerning the Status of the Artist

Author: Garry Neil, Neil Craig Associates Quebec research: Guillaume Sirois
Canada responded to the UNESCO Recommendation by creating the Siren‐Gélinas Task Force on the Status of the Artist which reported in August 1986. The 37 recommendations urged action by all levels of government on taxation, copyright, collective bargaining rights, payment of professional rates by governments and their agencies, social benefits, health and safety provisions, education, training and freedom of expression.

In response to the Siren‐Gélinas Report4, the federal government appointed an Advisory Committee on the Status of the Artist, comprised of artists and officials from associations and

the federal Status of the Artist Act, which was proclaimed into law in June 1992.

Part 1 of the Act outlines important principles, including: “The Government of Canada hereby recognizes:

(a) the importance of the contribution of the artists to the cultural, social, economic and

primary role in developing and enhancing Canada’s artistic and cultural life, and in

(c) the role of the artist, in particular to express the diverse nature of the Canadian way of

life and the individual and collective aspirations of Canadians;

(d) to propose measures, based on research and studies, to improve the professional

THIS IS SOME KIND OF A BAD JOKE?

Ahhhhhh yes is that what they mean by lip service? Say one thing for official records but do the exact opposite?

“Part 1 also enables the creation of the Canadian Council on the Status of the Artist as a vehicle to give voice to the concerns of the artistic community and to recommend appropriate action by the government. ”

“While a temporary Council was appointed in 1991, its appointment was never confirmed by the Governor‐in‐Council as required by the Act. It effectively ceased to function in 1996, roughly a year after the substantive provisions of the Act were implemented. As reported below, the Council was eliminated in 2010. ”

The MAGGIEQUINN Studio in Bathurst …
Hey … Even a broken leg cannot keep the unsinkable MaggieQuinn down for long.

NOTICE:It is now almost November and Maggiequinn is back on Tuesday, Friday and Saturday, 10 am – 3 pm END_OF_DOCUMENT_TOKEN_TO_BE_REPLACED 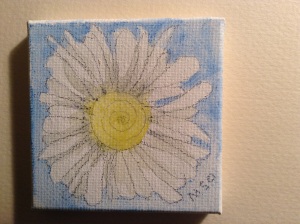 Guys … I’d love to contribute but I have no credit card …
What is a person without a credit card to do?
If a credit card world discredits those without
What the
Do they become non-persons in this world
Is that the sort of reality we want?

Working on it George …
Ever heard of cold calling, George?
Or would that be cold calls?
No matter.
All amounts to the same thing … Hustlin … Long enough and hard enough and if you don’t give up in despair … Eventually …

No, George … Besides … what’s the use in getting discouraged?
But I’ve already shown you 9 pieces … Did you not like even one, George?
Yes, George I know you can get pictures already matted and framed at Wall-mart for under $25.00

And I understand … you want to be sure you get the most bang for your buck. And you really only are interested in artists with a NAME.

This Granny has been working very very hard. Did you like not even one of the nine I showed you? There are only so many years left George … I cannot go on forever doing art and never getting paid. You think I’m not working hard enough at it? My art is not good enough … You think I’ve just not tried hard enough … Not really worked my arse off?

First let me tell you a little story … Happened yesterday … Not an auspicious day overall … I was busy cleaning … No time to work at my sound sculpture … Did receive some comments … Favourable? Hmmmm … One person appeared to like it … Said it was just the idea he needed … Would copy it to fill an empty space in his house … Money? … Money, did you say? As in … Did he offer to pay me for using my idea? What do you think, George? 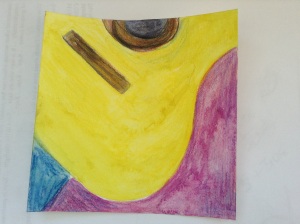